Pandas have been known as a species under threat since the early 20th century. So when you’re deciding on your home’s ideal hardwood flooring and want something environmentally friendly, you’ll likely begin searching for ‘natural and sustainable’ materials, like bamboo. We ask if the bamboo harvesting used to make flooring takes food off the panda’s plate in the greener living spirit.

Absolutely not.  There is a multitude of reasons why pandas have become endangered in the past. The single most important factor is the fragmentation of their habitats due to human encroachment and hunting.

The bamboo species used for bamboo flooring is not eaten nor inhabited by pandas.  It’s a reasonable concern, though, given that pandas eat almost 99% of their daily calories from this plant. Along with various bamboo shoot species, they have a varied diet consisting of leaves and stems.

Are Pandas in Danger?

As of 2016, the giant panda is no longer considered an endangered species, however as little as 3 years ago (2014), there were just 1,864 giant pandas in the wild in China – this was represented by an overall population increase of 17% in the decade to 2014.

While this figure seems incredibly low, this does represent a significant increase from the late 1970s, during which time numbers were leveling at a frightening 1,000.

This comes from National Geographic:

Giant panda populations in the wild have risen steadily by 17 percent in the decade up to 2014, when a nationwide census found 1,850 giant pandas in the wild in China. That’s up from the last census of 1,600 animals in 2003.

Meanwhile, the story isn’t so positive for the Great Apes and Orangutans in the wild, which are dramatically decreasing in number – it seems where one species begins a recovery, another sadly declines.

Did you realize the average panda will consume anywhere between 26 and 83 lbs of bamboo…per day!?

Their existence currently remains stable. However,  it’s essential to ask ourselves if it is, in fact, sustainable and whether harvesting this plant is impacting this relatively fragile species. 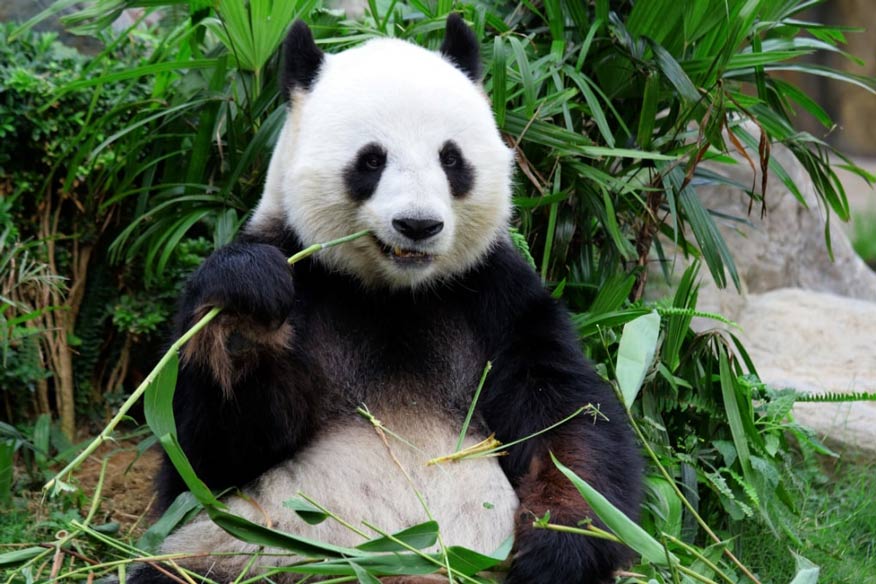 Interestingly, pandas actually have the digestive systems of a carnivore, and while the majority are exclusively vegetarian, pandas will sometimes hunt pikas and several other forms of small rodents.

Giant pandas in the wild are actually only found in China. Here they live in the mountainous and remote regions of central China, specifically Shaanxi, Sichuan, and Gansu.

Did you know Pandas eat 12 hours per day? That’s around 28lbs of bamboo, and they eat this much because bamboo is low in nutrients. Just as well, they have extra strong muscle walls in their stomach to digest this roughage effectively.

Pandas like their space, and a heightened sense of smell mean they get it. They’re actually pretty lonely, by choice too. Around 1.9 square miles of personal space is what they prefer – things can get a little touchy if they get too close…

What Threats Pandas Face (It’s not Due to Flooring)

Giant pandas remain under threat due to two key influences:

Industrialization and the Future of the Species

Every panda that lives in the wild can be found in China’s Yangtze River basin, where significant industrialization continues. Despite this region stretching some 448 million acres over 3,900 miles, the unprecedented economic growth, alongside expanding industries, is progressively impacting the river, its diverse wildlife, and the communities that rely on the river for water, farming, and fishing.

This industrialization also isolates pandas groups, affecting mating and reproduction and, therefore, future hope for pandas’ survival. What’s devastating is that pandas often live in solitary, only meeting with others during springtime for mating.

However, over the course of a year, roads, railways, and urban areas may spring up on the route that pandas previously followed – interrupting the mating season altogether.

The Enemy – Poachers and Hunters

Poachers tend to be responsible for a small number of slain pandas, whilst hunters who aim for other animals kill pandas accidentally. What’s scary is that these numbers represent a more significant number than poachers!

Chinese Efforts to Protect the Panda

While some Chinese legislation has been put in place to protect the panda population, this is somewhat limited. Preserves serve as a haven for some, and anti-poaching laws are stringently enforced. That said, China’s huge over-populous means that the urban sprawl continues, whilst tracking down and prosecuting poachers remains a very challenging task.

Pandas are no longer endangered; there’s research to show this. The flooring industry is not directly damaging their chances of survival as a species – it’s the threat from hunters & poachers and the commercial industry as a whole, which unfortunately affects the pandas’ habitat and wildlife general.

We’re passionate about the planet and committed to providing ethical bamboo flooring and installation and maintenance products.

‹ Buying Hardwood Flooring for Your Home: Is Bamboo Flooring Expensive?
Common Recycling Mistakes & How to Avoid Them ›