Home › Gardening › Should You Build a Green Roof?

Should You Build a Green Roof?

One area where America seems to be starting to lead the way in recent years is green roofs. You may think that building a garden on top of your house is a bad idea, but it’s actually one of the most eco-friendly things you can do. Not only does it add a valuable level of insulation for your home and extend its natural life, but it can also provide a home for local birds and insects.

What is a green roof?

Essentially, it’s a garden designed for a section of roof with a layer of protection underneath which means you don’t have anything leaking into your home when it rains. In areas such as New York, it has been largely used to offset the effects of torrential downpours and flooding, as well as providing much needed green spaces in the city.

A green roof can be a closed-off area or for larger expenses that have pathways and seating where people can go to relax. Many businesses have opted for rooftop designs to boost their green credentials as well as provide places for staff to go. After a slow start, where we lagged behind other countries, green roofing has come into its own over the last six years.

It may be a global phenomenon but America is up there with the best when it comes to the innovative design that brightens up our cities and towns.

According to USA Today:

“The U.S. Green Building Council introduced LEED certification parameters for commercial buildings in 2000, and that’s when the green roof revival began. Green roofs on office buildings, apartment complexes, and shopping centers provide insulation and storm water management. The roof of the new Facebook building in Menlo Park, Calif., about 70-feet up in the air, offers nine acres of greenery.” 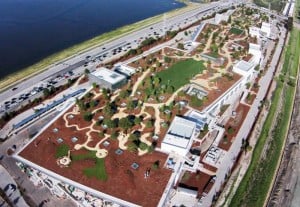 What are the benefits of a green roof?

You know when an idea has a bunch of mileage when high flying American companies and local government are embracing it. Green roofs present a low-cost environmental solution with some major benefits:

Stormwater runoff: In cities like New York they were originally introduced to help with a large amount of waterfall from storms that placed a burden on the city sewer system, helping to absorb around 60% of the runoff. The result of installing a green roof is less flooding and less expenditure on repairs when there is heavy rainfall.

Promoting biodiversity: Green environments obviously attract all sorts of wildlife, not to mention the plants you can grow. They are a brilliant way of invigorating inner-city areas and attracting back all sorts of animals and insects.

Reducing urban heat: You may not be aware of this but inner cities create their own heat and this can cause problems for the environment including lowering air quality. Chicago has invested in a large 20,000 sq ft roof garden with the primary purpose of reducing the urban heat effect in the city. According to Green America, the project would also help reduce the amount of energy used if rolled out across the city:

An energy study estimated peak demand would be cut by the equivalent of a small nuclear power plant if all of Chicago’s roofs were greened, according to Weston Design Consultants, because more Chicagoans could give their air conditioners a rest. 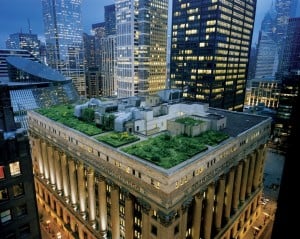 Space for recreation: For larger roofs with the ability to take the weight of the roof and several people, a green area can be used as a recreational space. Providing much needed green environments in the heart of our cities can only be a good thing.

Green roofs aren’t just good for the environment. A new study from the University of Melbourne found that being on a rooftop gardens for 40 seconds can markedly increase concentration and productivity levels.

Growing crops? There have been some suggestions that large spaces can also be used to grow crops. It’s not something that has caught on just yet but localized urban agriculture could be a thing of the future.

Insulation: Green roofs provide a good deal of insulation, keeping homes warm in winter and cool in the summer. That means you can reduce your fuel bills too and also your carbon footprint, all of which help the environment.

Is my home suitable?

Whilst most of the work on green roofs has been on a larger scale and within our cities in the USA, there’s no reason why it can’t extend to our own homes if circumstances allow. Contrary to popular belief you don’t generally need a flat roof, though a sloping one will affect the type of greenery that you can include.

One of the things individual homeowners will have to think about is the amount of maintenance that is needed to keep a green roof. It’s a living thing so the grass will need to be cut on occasion and the plants will have to be pruned.

If you don’t fancy a green roof, then how about a green wall? Using a lattice structure you can plant things up the side of a wall to create an impressive vertical garden. Take a look at this superb example from Paris, France: 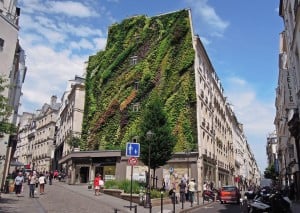 Some of the more unusual green roofs in the world

There’s no doubt that green roofs can look impressive, especially when viewed from above. Washington DC currently tops the list for the most amount of space given up to green roofing, closely followed by Philadelphia, Chicago, and New York. But we’re not the only ones embracing the idea of rooftop gardens. Some of our cousins in Europe and other parts of the world have some pretty crazy ideas when it comes to design.

How about this small home in Sweden. 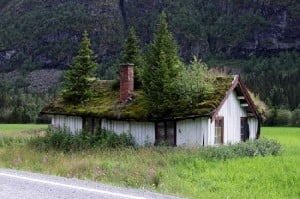 Or this amazing design in Uxmal, Mexico. 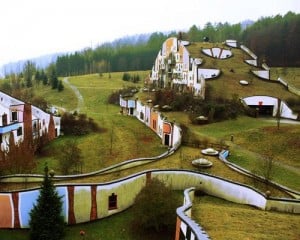 And if you want a big green wall, then how about this one in Japan. 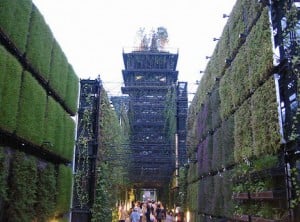 The good news is you can expect to see a lot more green roofs being constructed over the coming years, particularly in our inner-city areas where they are perhaps most needed. And if you want to try it yourself, there are plenty of companies that can help you achieve the perfect garden.