The mineral magnesium oxide, also known as MgO, is the primary ingredient in MagPanel (aka MgO panels or magnesium oxide boards). MagPanel is a fireproof construction material that is recently gaining popularity in the United States.

MagPanel is the perfect answer to construction needs in the home and commercial facilities because they are strong, durable, non-toxic, and mold-proof, with unbelievably impervious fireproof properties. They are currently much more commonly used in Asia, probably because most MgO is mined in or near China, where much of the deposits are found. China has strict rules about exporting its raw materials, so most MgO products are produced and exported.

Even though MagPanel might be a new construction material here in the US, magnesium-based cement has actually been used worldwide for many hundreds of years. It was used in the construction of the Pantheon in Rome AND the Great Wall of China. Although the materials used in these projects weren’t exactly like today’s more advanced boards, the naturally fire-resistant minerals and product chemical composition were essentially the same. The fact that these ancient structures are still around is testimony enough to the durability of MagPanels.

What are MagPanels (Magnesium fireproof boards)?

MagPanels can replace materials such as cement-based products, wood, and gypsum. They are also cheaper to maintain than most of those products; they perform better and often use smaller thicknesses to achieve the same result.

These versatile boards are not only fire-resistant, but they are also non-toxic, strong, mold-proof, and still retains their strength when wet. The many applications of MagPanels include linings of ceilings and walls, fascias and soffits, exterior cladding, floor underlay, and tile backing. MagPanel can be used in practically any type of construction where fireproofing is required. Depending on the structure’s size and cost, they can potentially save millions of dollars by preventing devastating fire damage.

How common are residential and commercial construction firms?

Between the years 2012 and 2016 in the United States, 355,400 recorded fires were recorded to home structures. These fires resulted in over 2,500 civilian deaths, more than 11,600 civilian fire injuries, and $6.5 billion in property damage. Home fires were responsible for four out of every five fire-related deaths.

Why is the kitchen the most commonplace for a house fire? Not surprisingly, the kitchen is a place that inherently involves lots of high heat and electricity, two main ingredients for a cooking-related fire. You may be familiar with the scenario where oil or grease gets too hot, and someone throws water on it to put out flames. The result of this action is absolutely explosive and can cause the fire from the oil to spread. The video below shows the effects of pouring water onto hot oil.

How MagPanel helps prevent the spread of fire 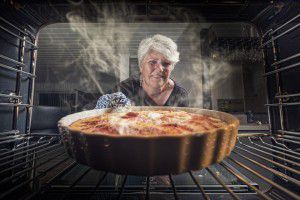 The kitchen is the most commonplace for residential and commercial building fires.

There are several uses for MagPanel to construct the kitchen that will help prevent the spread of a flame or flareup. The boards are fairly versatile in their potential applications. They can be used to make cabinets, ceiling tiles, floor tiles and subflooring, and even decorative interior wallboard – all prevalent elements in most kitchens. If a fire spreads to these items when made of MagPanel, the fire will only cause some cosmetic damage, and it won’t spread farther.

The second most common area in the home for a fire to start is the bedroom. The most likely reason for this is the abundance of flammable materials typically found in the bedroom, such as carpet, drapes, bedspreads, pillows, and linens. MgO certainly can’t be used to produce these items, but MagPanel can be used in the flooring, ceiling, and walls to help prevent the fire from spreading farther than the bedroom itself. Having only one burned-out bedroom is better than having the home destroyed.

Another common room for fires to start is the living room. The living room is a place where you’ll find fireplaces, candles, heating equipment, and electronics, and it’s a popular area for smokers. If any of those heat-producing sources cause a fire, other flammable items are found in the living rooms, such as couches, drapes, and carpet that can quickly spark and lead to the spread of flames. Like the bedroom, the living room can be protected using MagPanels when constructing the flooring, ceiling, and walls to prevent a fire from spreading farther than it normally would.

The laundry room is also on the list of common areas in the house for fires. This is usually due to lint from the dryer clogging up vents and filters. Dryers produce a lot of heat, and sometimes the lint catches fire. Once the fire starts, there is a danger of reaching flammable clothing in the dryer or hanging clothes that would light up quickly. If MagPanels are used in the laundry room construction for the flooring, walls, and ceiling, they will help prevent the fire from spreading into other areas.

What is MgO construction?

Magnesium fireproof boards can be used throughout the home and building construction.

The National Framers Council says that “Regardless of the material used in a building’s construction, prolonged exposure to fire without mitigation can lead to structural weakness and potential collapse.” The keyword here is ‘prolonged.’ The reason fires are prolonged because they spread and find more flammable materials. If more MagPanels (MgO fireproof board) are used during the construction phase of homes or commercial buildings, that will limit how far a fire would be able to spread. An entire framed out condominium complex might very well burn down from a kitchen fire. However, in condominiums protected with MagPanel throughout, the fire would most likely be contained to the one-room where the fire began. This could potentially save many lives in addition to expensive equipment, sensitive information, and the cost of rebuilding a structure.

‹ Examining the Effects of Hardwood, Cork and Bamboo Flooring on the Environment
The Interesting History of the Bamboo Plant & Its Uses ›