Fast fashion — the process of producing quick, cheap, runway replica clothes — is harming the planet, but how about bedding? While the idea of attractive, inexpensive clothing seems positive, the speed at which such clothing must capitalize on trends ensures that it’s unsustainable.

In the pre-internet era, trends caught on slowly, and clothing styles would last far longer than they do now. In the pre-automobile era, trends moved at a comparative crawl. Before 1900, fashion wasn’t something the average person likely spent much time or money considering.

No longer would someone buy a pair of pants (or make them themselves) and expect them to last ten years. Why make an item of clothing that will last a decade when it would be out of style in a matter of months? Clothing has become a consumable item with the shelf life of fresh sushi.

However, the question remains whether bedding — such as sheets and blankets — contributes to the same level of waste that fast fashion does. Is there eco-friendly bedding? Can consumers easily find sustainable bedding options?

Before exploring these questions, let’s examine why fast fashion is such an issue.

How Fast Fashion Is Eco-Unfriendly

So how exactly do these quickly manufactured items of clothing cause any harm? Isn’t it great having access to fashionable clothing at low prices?

The production of clothing to satisfy the needs of fast fashion uses a lot of resources. The fashion industry uses 93 billion metric tons of water each year to sustain crops like cotton. How much water is required to create enough cotton for one shirt? The answer is 3,000 liters.

Other fabrics, such as polyester, are created mainly from fossil fuels. This causes a host of other issues such as CO2 emissions and the release of microplastics and microfibers into the oceans.

And don’t forget that – to make room for the crops necessary to grow cotton and other such plants – about 70 million trees are cut down each year. Unfortunately, these aren’t sustainable forests of new growth trees planted specifically for use in viscose and rayon. Irreplaceable old-growth trees are in danger of getting cut down and used to make shirts and pants.

Then there’s leather. The animals needed to produce leather need to live and eat somewhere — increasingly in locations where forests have been cut down to sustain cattle. The estimate is that 80% of the deforestation in the Amazon is directly due to cattle ranching.

The problem of material consumption would be a much less significant issue if clothing could be recycled to reduce the number of resources used to create them. Despite efforts to recycle and reuse clothing, about 85% of clothing ends up in landfills or gets incinerated. Of course, much of the clothing sold isn’t recyclable, anyway.

Another issue with fast fashion materials is that they’re often made with substances known to be harmful. The dyeing process can be especially egregious, producing many by-products that get pumped out into open water.

The clothes dyeing process is responsible for an estimated 20% of the world’s water pollution. Moving to natural and safe dyes seems like an obvious alternative, but – while these dyes might be safe for the environment and humans – they use up a lot of resources.

The dyes have to come from somewhere, and the source is usually plants. Some dyes are even made from insects. To provide enough dye to satisfy global production, the issue of waste would come up again.

Additionally, it’s not just the dyes themselves that are the problem. Chemicals called mordants are used to get the dyes to “stick” to the fabrics. Some mordants are fine, such as table salt or vinegar. These can’t be used on an industrial scale, however.

Mordants used in mass clothing production are usually metal salts like copper sulfate, iron sulfate, chrome, and tin. Ironically, these mordants keep colors from fading quickly, even though much of the clothing that’s purchased is never even worn.

While CO2 production was briefly mentioned above, it’s a real problem for fast fashion. According to the MacArthur Foundation, the fashion industry is responsible for 1.2 million metric tons of CO2 annually.

This is more than the output of some entire countries! In fact, the fashion industry is responsible for 10% of the entire global output of CO2. Polyester is the main culprit: using about 70 million barrels of oil per year.

While plastics will get the lion’s share of oil production over the next 20 years, textiles aren’t far behind, with 15% of all petrochemical products being textiles. This isn’t a reversing trend, either, since polyester has far surpassed cotton as the most common fiber used to make clothing.

While using oil to make fabrics doesn’t displace trees as other crops do, it can hardly be called “sustainable” despite what marketing efforts may claim. 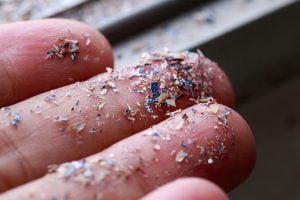 Microplastics deserve a closer look — a much closer look — since they are microscopic, as the name implies. Since they can’t be filtered and are now appearing in humans, it’s important to determine how much of a problem they really are.

As they make their way into the environment, they will enter and block the gastrointestinal tracts of wildlife. The plastics build up and take up space, tricking animals into believing that they’re already full of food; therefore, they end up starving.

Also, toxic substances can stick to microplastics. While these substances might not be a problem in small amounts, they will cause harm as they build up over time.

So, how much microplastic are we consuming? Americans ingest about 74,000 microplastic particles every year. How much is too much? Scientists are working hard to figure that out, but if the observed impacts on wildlife and marine animals are anything to go off of, the answer is most likely “less than what’s currently being ingested.”

Now we arrive at one of fast fashion’s more direct human impacts. Many of the clothes manufactured for the fashion industry are made in incredibly poor conditions for low pay.

How poor is the pay? About 2% of the workers who make clothes earn a living wage. How many factory workers are in the fashion industry? About 75 million. And many of these workers are child laborers.

And what are the conditions like? Many of these workers are affected by the pollution involved in creating the clothes. Since the countries where many of these clothes are made don’t have the same safety standards as the U.S. or other first-world countries, the exposure to toxic chemicals is high.

The Effects on the Consumer

Finally, there’s the cost to you, the consumer. Clothes marketing emphasizes “fashion seasons” and “the latest trends.” The implication is that the consumers must spend more money lest they be seen as “unfashionable.”

Not that consumers have many choices since clothes aren’t made to last anyway. So not only do shoppers have to buy clothes to appear trendy on social media, the clothes wouldn’t last even if they wanted them to.

If someone does want to spend more on an article of clothing made with sustainable materials in first-world working conditions, they’ll have to pay more and still have to contend with the issue of fashion. Social pressure is a strong motivator, and the need to “fit in” pushes people to buy into clothing trends.

How to Flee from Fast Fashion’s Flaws

If you’re concerned about fast fashion’s impact on the planet (and don’t worry, we’ll discuss eco-friendly bedding and sustainable bedding shortly), there are alternatives.

First, you can simply spend more money on sustainable, ethically sourced alternatives. The clothing might cost more upfront, but it will last, and you’ll have more peace of mind wearing it!

Secondly, you can buy second-hand clothes. Thanks to the pace of fashion, huge amounts of clothing that still has life left gets donated to thrift stores. Not only does thrift store clothing keep you from buying new, but often these stores are funding rescue and recovery efforts for homeless and addicted people in your hometown.

Your third option is repurposing or mending your existing wardrobe. You can make old pants into shorts or t-shirts into rags, and if you’re feeling particularly creative, you can always create a quilt from old clothing.

Fourth, you can extend the lifespan of your clothes by adhering to the care instructions more carefully. You’d be surprised at the mileage you can get from clothes when you simply follow the directions! Fifth, you can even make your own clothes!

Finally — and this may be the hardest one — you can care a little less about trends. For some, this won’t be a hard task at all. For others, it’s a bit more of an issue.

Someone in the fashion industry or who relies on their appearance for their job (actors, spokespeople, newscasters) might have a bit more of an uphill battle in this area. But they are also in a unique position to take hold of the issue and give it a public face.

The discussion so far has been almost entirely about the global impacts of fast fashion, but how does bedding fit into the big picture? Bedding is made of fabric, too, so does it suffer from the same sustainability and human rights issues that plague the clothing industry?

There Is Fast Bedding

Make no mistake that there are bedding companies that source their textiles from the same places as clothing companies do. They have the same environmental problems as fast fashion. Cotton sheets cause just as many problems as cotton shirts, and bedding can also end up in a landfill. 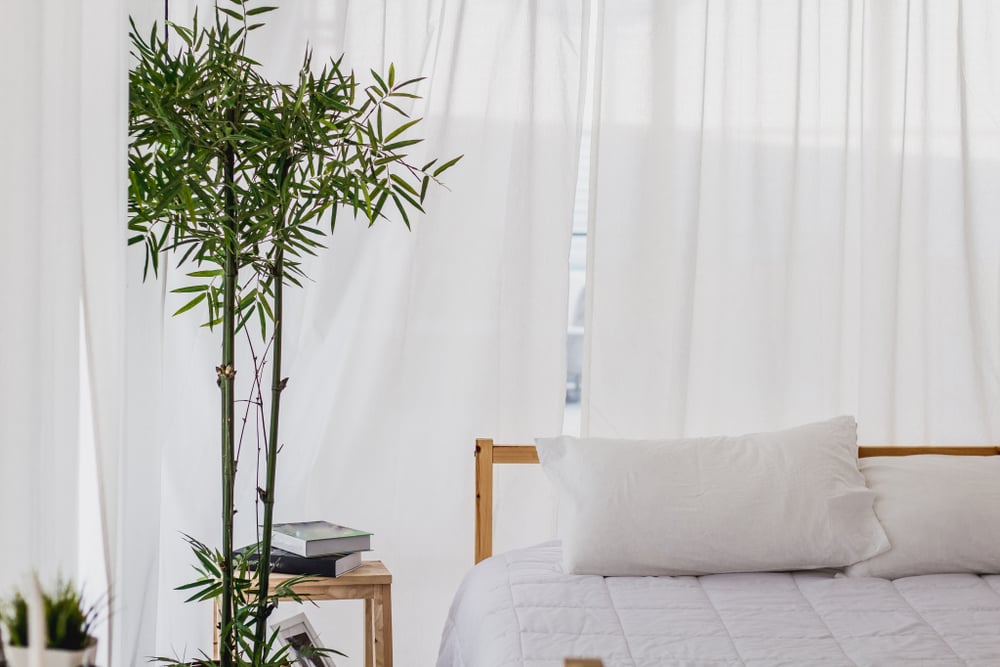 How can bedding be made in an environmentally conscious, humanitarian way? What materials can be used? We’ll start with the most eco-friendly bedding material and go from there.

As long as it’s sustainably sourced, bamboo bedding is the most eco-friendly bedding option available. The main reason is that bamboo grows astoundingly fast, at about three feet every day. That’s about an inch and a half every hour!

Bamboo requires very little water, and harvesting doesn’t disturb the soil. Buyers beware of fabrics made from “bamboo viscose” or “rayon made from bamboo.” These fabrics still use harmful chemicals such as carbon disulfide in their manufacturing.

Thanks to the Federal Trade Commission, labeling makes it easy to figure out the kind of bamboo bedding you want and avoid the harmful stuff. And since bamboo is so fast-growing, strong, and requires so few resources compared to other materials, it’s also finding its way into flooring, utensils, serving trays, and yes — even clothing.

As a material for bedding, you might think that bamboo is only valuable thanks to its environmental benefits but creates scratchy, uncomfortable fabric. Nope! Bamboo is excellent for crafting bedsheets. Bamboo sheets are almost universally soft, smooth, and cool — but also strong and durable.

Another option is eucalyptus. Again, it must be sustainably sourced. Eucalyptus can also result in soft, strong bedding, and the best fabrics sourced from this material are made in a closed-loop process that presses the wood fibers into non-toxic solvents.

As long as the eucalyptus fabric is obtained from sustainably managed forests, the environmental impact is almost as small as bamboo.

While not as fast as bamboo, hemp still grows quickly, with maturity reached in less than four months. Once hemp is ready to be harvested, it yields over twice as much fiber as cotton.

When grown organically, its environmental impact is incredibly low, thanks to its minimal water consumption. While the fabric traditionally isn’t as soft or comfortable as bamboo or eucalyptus, companies are working on getting it as soft as possible